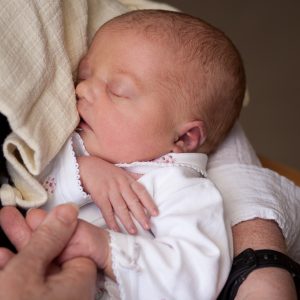 Friday 26th August 2011 Ellena May Page was born. She was 10 days overdue and weighed 7lb 2oz. After 10 hours labour, the midwife realised something was wrong so whipped us down for a scan which showed that Ellena was breach so we had an emergency caesarean.She is our first and only child; we were so very excited, absolutely over the moon.

Our excitement was cut short by the midwife telling us that she believed something was wrong with Ellena as she had a single crease across her palms, a hole at the base of her spine and a funny shaped head. We have never been so insulted as like all typical new parents; Ellena was the most beautiful baby we have ever seen! She took her away for the doctors on Neonatal ward to have a look at her and take some blood tests. They believed she had a genetic disorder.
We took her home after four days and had the best time of our lives while waiting for the next hospital appointment. She was just like any other baby although she struggled to hold up her head, breast feed and gain weight. We bottled fed her and six weeks later, she was admitted to hospital.

14th November 2011 was the day Ellena was diagnosed, after being in hospital for a month of constant tests. The doctor said her long chain fatty acid test came back abnormal. We need fat to feed our brains so she will slowly become brain damaged. This also affects the nervous system and all her organs. They told us that she was partly deaf and blind. Life expectancy in the region of 6 months to 3 years. It is called Zellweger Syndrome. It is rare and affects 1 in 50,000 to 100,000 babies and the doctor had never come across it before and neither had the nurses. He explained about Peroxisomal Biogenesis Disorder, cell structures and missing enzymes. Words cannot explain how crushed and heartbroken we felt. The doctors had taken so many blood tests by then that they were starting to damage her tiny veins. They started taking them from her head, she haemorrhaged and her head had a swelling the size of a golf ball and was bruised. She was most upset.

The paediatrician arranged for us to have superb home support. We had a social paediatrician and nurses that visit home every week. We got a new dietician (this one is really good). We started baby massage course which Ellena loved. We had visits from a visual impairment teacher, speech therapists and more hearing tests. The calendar soon started to fill up with all Ellena’s appointments. She started Physio and Portage (which is for helping development for disabled preschool children). Portage had been great as she really started to play.

Ellena was a very content baby. She cooed and gurgled a lot. She did not cry much even though she had gone through so much. She felt the love and she thrived until January 2012 when her liver and spleen enlarged and she became jaundice and bled. She was taken to a hospital in London where they told us she was going to die. She went through a lot in this hospital for a fortnight but fought to stay with us so was discharged to Naomi House Children’s Hospice for end of life care but she was not ready to go and discharged from there after four days. Ellena was on Vitamin E, Vitamin K, Ursodeoxycholic Acid and Delavit multi vitamins. She was on prescribed MCT pepdite milk with polycal. Ellena was on Key Omega and Doc Omega.

She thrived through March and April 2012 at home but was admitted back to hospital in May 2012 as she was struggling to breathe. She had aspiration pneumonia, she recovered then caught a cold so this turned into viral pneumonia and ended up in high dependency unit (HDU) on a CPAP ventilator. She was given antibiotics, hydrocortisone and prednisolone (steroids) and slowly improved. At first the CPAP was doing 90% oxygen, it inflated her lungs for her as they were sticky so not inflating properly. She was in HDU for 10 days as they weaned the oxygen down. Then she was transferred back to the ward. After a week on the ward, Ellena caught para flu so we were given our own room for isolation. She managed to breathe without any oxygen for a day before catching para flu and was doing well! She took another turn for the worse and after struggling to breathe again, ended up back in HDU. After 5 days in HDU, she improved again so was transferred back to the ward. She continued to improve so we got her home for one last weekend with an oxygen machine and a brief stay at Naomi House Children’s Hospice where she passed away 12th June 2012 aged nine and a half months old.
She was our beautiful shining light and loved and missed beyond words.