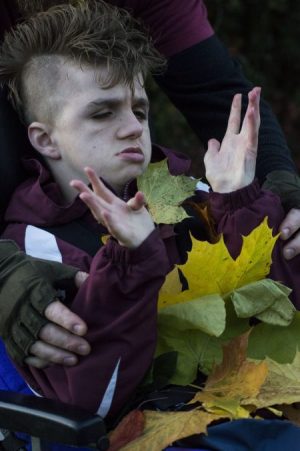 Cameron was born on the 28th August 1997 after an uneventful pregnancy. His apgars were pretty good, but he was struggling slightly to regulate his temperature, struggled to feed properly, had low muscle tone and an odd shrill cry. To the untrained eyes of first time parents nothing seemed too amiss to us, but the paediatrician who checked him over expressed some concerns and referred him to a consultant. A week later he was back in hospital for jaundice and then in and out for the next few months for failure to thrive and reflux. This continued pretty much for the first year of his life with different consultants noting issues such as poor muscle tone (hypotonia) global developmental delays and several ‘abnormalities’ such as a singular palmer crease, low set ears, wide bridge of the nose, a high forehead, dimple at the bottom of his spine, shortened limbs and small hands and feet. His geneticist explained that in of themselves, these issues weren’t a big deal, but collectively they pointed to something syndromic. He was sent for several blood and urine tests, a skin and muscle biopsy and an MRI scan.

A week after his first birthday we were finally given the diagnosis of Generalised Peroxisomal Disorder (Zellweger Spectrum) and told us that he was unlikely to live into adulthood. Our paediatrician drew a line representing the life expectancy for children with Peroxisomal Disorder and placed Cam about a quarter of the way up… putting his life expectancy somewhere around the 5 years mark. I’m very grateful for the way our paediatrician, nurse and even Cam’s PT looked after us that day, because as our world fell out from under us we had to stay at the hospital for another three hours before an ophthalmology appointment; it barely registering as they told us he was all but blind.

It wasn’t until a couple of months later when he was also diagnosed with adrenal insufficiency and started on steroids to correct this, that we would start to see the feisty robust little boy that would blow all our expectations out of the water.

The next few years passed with Cam dealing with an awful amount of pain that would torture him into the early hours of the morning nearly every night due to severe colic that would last until he had a gastrostomy feeding tube inserted. This not only improved his nutritional intake but gave us the ability to vent air out of his tube, which made for a vast improvement. Another improvement came from a study in Barcelona that offered him an essential fatty acid called DHA (docosahexaenoic acid) something that we are now receiving for him here in the UK. At the time, pure DHA was something we could only get in Barcelona through our doctor there. We noticed some subtle improvements but one thing we were always pretty certain significantly improved was his vision. For a few years Cam made small improvements thanks to his fantastic school, and he became a pretty proficient boot scooter (bottom shuffling, but with style!) It always makes me think of someone rowing a boat for some reason and involves hands and feet to support himself and his bum up and forward. It’s a pretty efficient way of getting around, and something he still occasionally does to this day.

Life was pretty good for him other than intermittent pain and he barely saw the hospital ward for a good few years. It wasn’t really until he hit his teens that things started to change for him. He was dealing with huge amounts of pain again due to constant air swallowing (a self comforting/stimulating behaviour that leads to some pretty awful stomach pain) and he had a couple of issues that landed him in hospital and led to us discovering that his hip was subluxated/dislocated, which had been causing him acute pain. In March 2013 his tibia and fibula bones spontaneously fractured which led to the discovery that he also had low bone density. This led to the discovery that bone pain was causing the constant air swallowing which pretty much stopped once he started pamidronate infusions to densen up his bones. Thanks to the GFPD conference in Nebraska, we were able to see a Doctor in Omaha who specialises in bone issues in children on the Zellweger spectrum and he was able to stay on the infusions for five years in total. He’s now finished the infusions and we are looking at other ways we could possibly aid his bone health.

At around 18 years life has changed dramatically for Cam. The myelin sheath of his brain (the substance that protects the nerve endings in the brain) deteriorated leaving with several types of seizures that increasingly became worse. We reached a maximum on anti epilepsy drugs and were left with little in options, however we feel we found a little relief in CBD oil. We would wake up to a different Cam every day. Some days he’d strong enough to shakily sit unaided for a second or two, other days he could barely hold his head up. He became increasingly fragile and a slight cough in the morning could result in 15 litres opti-flow oxygen by the evening. We lived every day not knowing whether his health would again take a sudden downturn, and it was pneumonia that eventually took his life on 9th February, 2019, at 21 years old.

By this time life had simply become unsustainable for him, we spent every waking moment focused on keeping him alive and comfortable and his quality of life was diminishing. When he took matters into his own hands and released himself from this cruel condition it was both painful and a relief – we can finally bear the full weight of his pain for him.

He had a beautiful woodland burial surrounded by people who loved him and followed his story. His service was held in a beautiful barn with the smell of the wood burner and memories of him circulating. We were led to his burial spot by a generous and wonderful drum band. His life was celebrated in true Cam style.

We will forever be proud of our incredible boy. Zellwegers never did take his strength of character away from him. He was the guy who would find something to smile about even on his worst days! Regardless of the struggles and the incredible amount of suffering he had to endure over his 21 years, he amazed us with his bravery, adaptability and dry sense of humour.

Despite everything, he wass one of the lucky ones; most children on the Zellweger Spectrum don’t live to see their 21st birthday; many never even see their first. We were incredibly lucky; Cam turned life upside down and brought true perspective to it. We’re a world away from the young naive parents who proudly held our beautiful baby boy all those years ago – unaware of the most awful and wonderful places he was going to take us. I’ll be forever grateful that he came into our lives. I’ve not always been the mum I wanted to be; I have so many regrets and things that with hindsight I would have fought harder for/let go of/done differently, but we loved him and we will continue to love him until our last breath and beyond.

Now, where he used to sit beside me sleeping as I worked, sits a photo of him and hangs chimes to remember him by, as I work on for Zellweger UK in his name. He will never be forgotten; his name will never not be spoken.