Crossing counties in honour of Cam, for Zellweger UK and the children coping with the same degenerative childhood disease.

On Saturday 21st July, 2018 I – alongside my very good (and extremely patient!) friend of a quarter of a century Ali – embarked on a 27 mile trek across 3 counties, up to the peaks and back down of four major hills in the South West,

They say you learn something about yourself on these kinds of challenges… it turns out I’m a complete and utter coward! Over the course of the day I built up an extensive list of things I’m terrified of, starting with the already firmly established cows, to the more newly acquired ownerless dogs, getting lost, roads, cars… mopeds… hills! Ali, it turns out, isn’t afraid of nearly enough things. Including falling off hills. I don’t think my nerves could have withstood seeing her approach another herd of unpredictable livestock or teeter on the edge of one more all but sheer hill side. I’ve decided fear is a good thing. A very sensible thing! 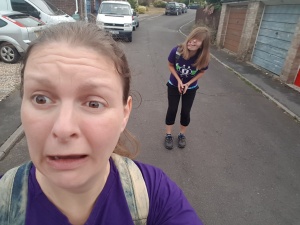 We started our walk at the Glynswood area of chard at just after 6am in the morning. It’s amazing what not a lot of sleep, morning seized legs (are we supposed to be this old personish in the mornings at around the 40 mark??) and the prospect of 25 plus miles can do to draw attention to leg muscles you didn’t know you had. Having done pretty much nothing in the way of practice walks, we set off not feeling hugely optimistic that we’d be able to complete a single hill, but hey ho, Lambert’s Castle here we come.

And I have to say it was a pretty easy ten and a half miles to Lambert’s Castle. Other than coming through the first few fields with soaked shoes after the only overnight rainfall in weeks, emerging from the next few maize fields as walking eco systems, meeting our first herds of cows, (to watch our first cow encounters please click here and here!) a large ownerless farm dog (who turned out to be a very friendly large ownerless farm dog) and getting a bit lost on unclear and slightly inhospitable footpaths (we’re talking barbed wire and taped off bridges) we arrived at Lambet’s castle around 10:30 in pretty high spirits. 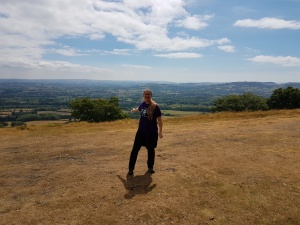 Thanks to Ali’s rather fabulous partner Ian, we were able to put on some dry socks, sit down to a snack and get a bit of lay of the land from the height of the hill. (Doesn’t look that far, we’ll be at Lewesdon hill in a couple of hours I reckon!) 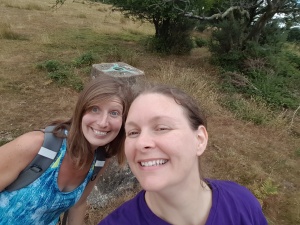 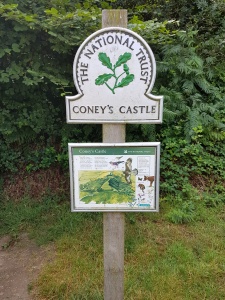 So initially heading off in the opposite direction, on to Coney’s Castle we eventually went… round and round Coney’s Castle we went looking for a footpath that would lead us in the direction of Lewesdon Hill, gave up, found our way back to the road to start what was the worst leg of the journey. 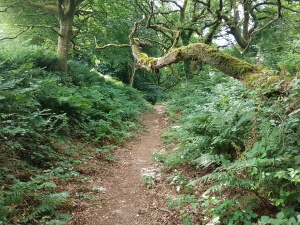 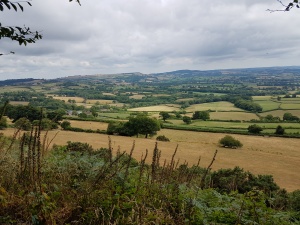 Ali’s back started to threaten to halt her part in the walk so we needed to stop so she could do her usual stretches, which had to be by a field of cows. Safely on the other side of a gate I should add, but while Ali was pretty confident that cows haven’t yet developed opposable thumbs, I wasn’t as convinced they couldn’t figure out a gate latch if they were curious or hungry enough. They didn’t, we survived, but after a few miles of relentless uphill road climbing in the baking sun with increasing toe blisters, we were far more concerned with who was moving Lewesdon Hill further away the closer we got.

On reaching the bottom of Lewesdon in it was Ian to the rescue again, this time armed with a flask of boiling water, tea bags, coffee and milk. Oh and cream cakes! After two cups of caffeine and a sugar hit each, we pretty much skipped up to the summit, angered a nest of bees and stopped briefly so Ali could stretch and rope swing off of the side of the hill. I took my turn to navigate and walked us down a path that was less a path and more an area of land slide, got us down to the point where we couldn’t see a path below but the slipping dry mud wouldn’t really allow us to climb back up so we had to keep going down. (The coast guard are more than happy to retrieve lost and stranded people hanging off the sides of hills right?!)  To watch our live feed from the top of Lewesdon Hill, please click here 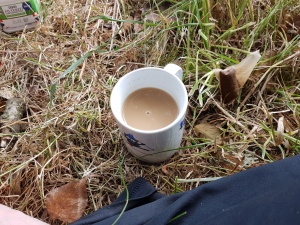 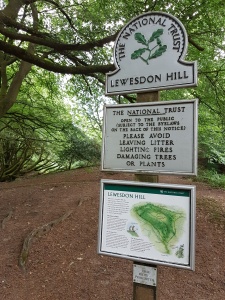 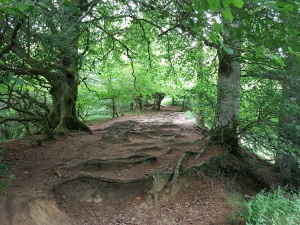 As luck would have it we did meet a path, walked towards Pilsdon Pen, somehow turned back and walked much of the length of Lewesdon back to the gate we walked in. It became clear at this point that we (well certainly Ali) can quite aptly find our way to and up a hill… but getting off efficiently seems to be more problematic. Nonetheless, a couple of wasted miles and an ownerless and not so friendly dog later and we were at the foot of Pilsdon Pen. To watch a short video of the area we walked click here. 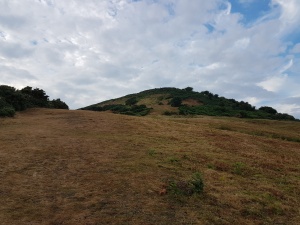 I have to say, it takes a special kind of talent to get lost trying to get off a hill as simple as Pilsdon Pen, but in true Tash and Ali form get lost we absolutely did; climbing down to the bottom on the wrong side before climbing back up and descending the correct side. 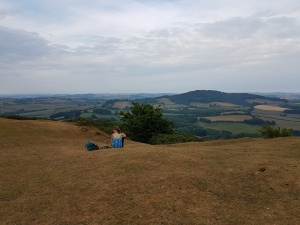 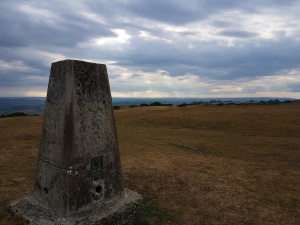 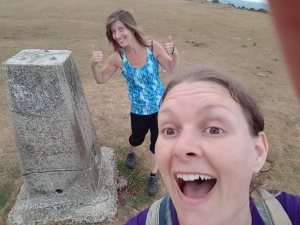 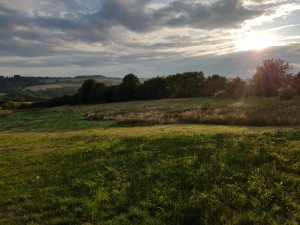 Of course we got to the last field but ONE before coming to our third and final field of unavoidable cows. Given that this was a 27 mile trek through the south west this could be considered extremely fortunate, but as far as I was concerned this was a third herd too many. My fear of cows is clearly much more of a serious phobia as I tremored and sobbed my way up the hill to keep a safe distance from them. A mere two cows even bothered to look up from grazing, but as we descended back down to the gate I still found myself trying to calculate how fast they’d have to charge to make the stile before we did. 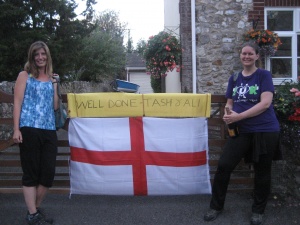 Having made it out of the essentially disinterested cows alive, it was a simple case of clambering up one last field and out onto the road where a second bout of energy speed shot us up the hill (aches and blisters be damned!) to Sue’s (Ali’s mum’s) house in Thorncombe where we rounded the corner to a hero’s welcome and a bottle of Champagne from Sue and Ian (deserved by Ali the Brave alone!) as my map logged 27 miles on the dot and right as the church clock struck 9 oclock.

I need to say that 27 miles was way less painful than I’d imagined, Ali’s back held out amazingly and neither of us really suffered much in the way of stiff aching limbs and even the blisters seemed quick to disappear. However, 27 miles of not knowing what was coming in the next field was much more traumatic than I’d ever anticipated and despite Ian’s plans to use cow exposure as a therapy, I’m veering more on the side of total avoidance…. for the rest of my life!

Thank you so very much to everyone who supported us by donating, sharing our fundraiser and cheering us on. We are surrounded by seriously wonderful people, I’m extremely grateful for every single one of you!

And I have to say, as much as we both vowed several times during our hike to never EVER undertake something like this again, I think it was something like 7am the following morning that I received a text from Ali saying something on the lines of “you know how the pain of labour seems to ebb away after giving birth… what are we doing for next year’s challenge?!”

So ideas so far have been Mount Kilimanjaro, a trek on camel back and a unicycle race challenge. Kilimanjaro would take us a bit far from Cameron and I’m not sure spending the day faceplanting a few feet from the start line could be considered much of a challenge. So if anyone has a couple of camels they can lend us for the day next summer, please let me know! 😉