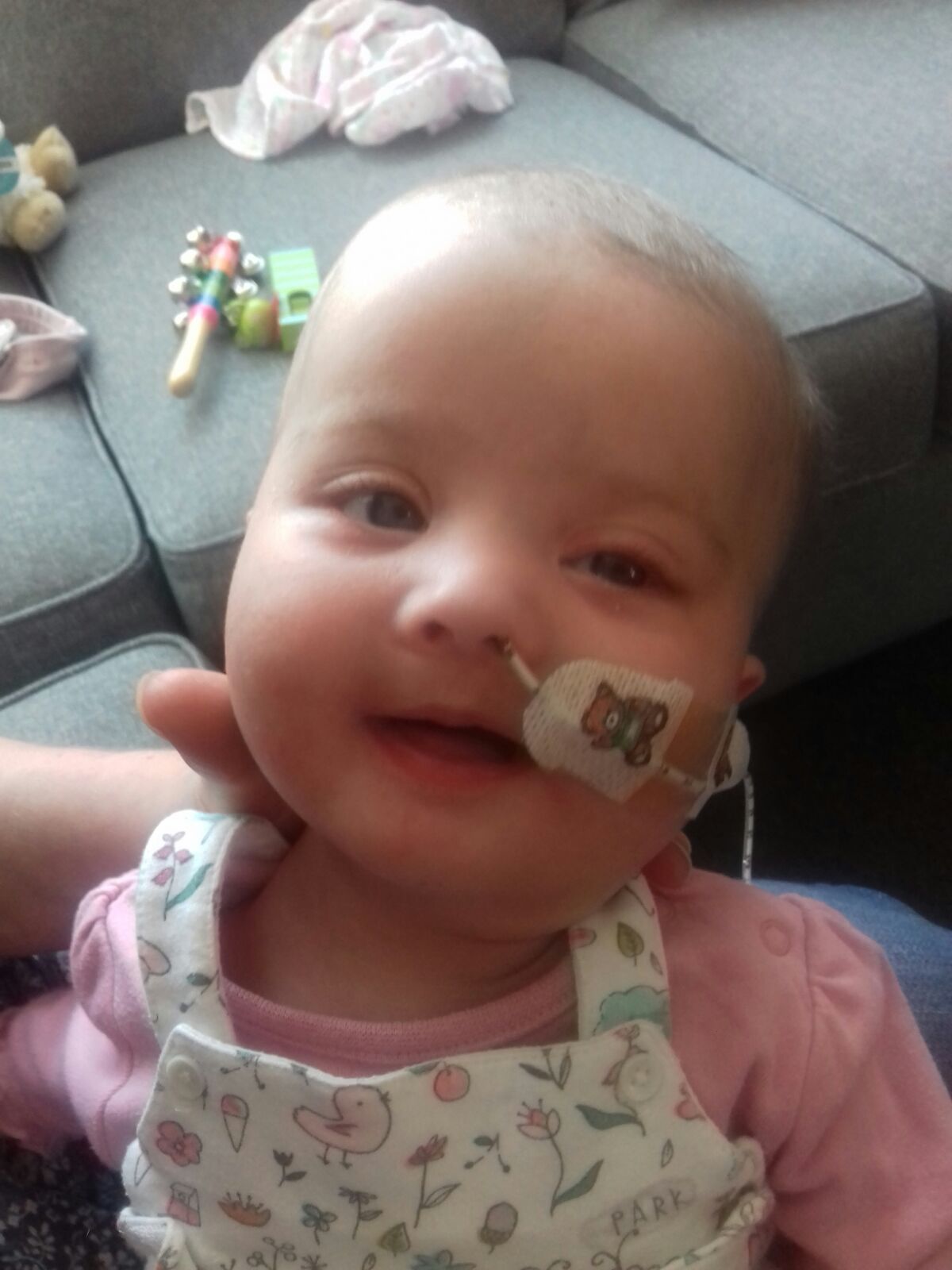 Ryan and I got married in 2013 and we wanted to start a family straight away. Nearly a year went by with no joy so we ended up at the doctors for tests. It turned out that we were going to need IVF to conceive. To say we were gutted is an understatement but we soon pulled ourselves together and started on the rollercoaster journey. After 3 previously failed attempts at IVF our fourth embryo transfer was successful. I can honestly say that being pregnant was the happiest time of my life.  We had wanted to be parents for so long and it finally felt like a dream had come true. At 20 weeks we found out we were having a little girl and we decided to call her Isabelle. My pregnancy was straight forward however there was some concern over Isabelle being a little small.  Isabelle was born on the 10th January 2018 at 5.49am weighing just 5lb 11oz. When they put her in my arms I cried hysterically as I could not believe our little girl was finally here.

Not even 24 hours later she was being taken to the special care baby unit as her blood sugars were low, she was struggling to feed, and she couldn’t maintain her temperature. They passed an NG tube so that we could top up her feeds whilst she was getting used to taking from a bottle. After 11 days Isabelle had stabilised and started to put on a little weight, so we were finally allowed to take her home.

We brought her home but we soon realised that out of the confines of the hospital she was still struggling with her temperature. We would put her to bed in a vest, baby grow, hat, mittens and 5 blankets. The heating was on 20 degrees nonstop. The health visitor came and told us to remove her hat as she should not need it indoors. She swiftly told us to put it back on when her temperature dropped to 35.5oC

Isabelle was also still struggling with feeding. We tried every formula, bottle, and teat on the market to help Isabelle feed. She was gaining weight very slowly but then suddenly she started to lose weight. By this point I had been accused of being depressed and finding motherhood a little stressful. No one was listening to me. I felt like I was going insane. I was on the internet day and night trying to find an answer. So, when the health visitor told me she had lost some more weight I knew we had to do something. I talked Ryan into taking Isabelle to Birmingham Children’s Hospital and so we bundled her into the car without a clue what we were going to say to them. I am glad to say they took us very seriously and Isabelle was admitted. She was 3 months old and weighed just 7lbs. After many tests we were called into a room and told the devastating news that Isabelle had Zellweger Syndrome. They said she was unlikely to see her first birthday.  We were absolutely devastated.

We formed a plan to nurse Isabelle through the next few months and we would celebrate her birthday every month by doing something as a family. We took her to so many lovely places and she had so many experiences. Life was really hard though. Part of Isabelle’s condition made her extremely unsettled a lot of the time. Seeing your child cry and not being able to do anything about it is debilitating. We would often have to sedate her.

As the months went by, we soon realised Isabelle was not going anywhere without a fight. We decided to take a leap of faith and organise a 1st birthday party for her. We made it to her birthday and we made sure we celebrated in style.

As we came into 2019 we were looking forward to the spring and organising lots more activities and days out for Isabelle. However, it was clear she was starting to deteriorate. By Easter she had started to sleep for days on end. We learnt that the seizure activity had increased and the sleeping was actually a form of seizure. She then started screaming in pain completely out of the blue. After many weeks of trying to work out what the problem was, we narrowed it down to an issue with her stomach. We were told that her stomach had started to send signals to her brain telling her she was in pain. She was put on a new medication and we were hopeful it would solve the issue. She did seem to improve but then she seemed like she was coming down with something. She regularly had chest infections, so we were well practiced at doing suction and chest physio. This time seemed different though. Then one day when I changed her nappy it was full of a black tar like substance. We were told it was from a stomach bleed. We took Isabelle into hospital but they did not seem overly concerned unless it happened again but in the meantime her chest was even worse. Her blood sugars were low as well. They moved her to HDU and we were confident she was in good hands. However, on 4th June 2019 we were told it was not a chest infection but a lung collapse. I held Isabelle and knew instantly she was struggling. We had formed an Advance Care Plan back when we first had her diagnosis which detailed how far we were willing to keep treating Isabelle. At that stage we were at the end of our plan. We had one option to try intubation in intensive care but warned it was very invasive and they were not hopeful it would work. They felt that Isabelle’s body was shutting down. We made the hardest decision of our lives to remove the oxygen and allow Isabelle to slip away.

Isabelle Grace Cowley may only have lived 16 months, 3 weeks and 5 days but she received and gave enough love to last a lifetime. She was our everything. She was deaf, blind, had little muscle tone, a floppy airway, frequent seizures, global developmental delay but she was the most beautiful little girl with a massive personality. She made us laugh and smile all the time and she taught us to love like we have never loved before. She is our hero.